The Imadoc research team has developed DALI, a framework for the design of pen-based software for structured document composition. DALI is based on a grammatical formalism making it possible to describe such document composition rules [Macé&Anquetil, ICDAR’07]. This framework has been transferred to the Evodia society and resulted in the Script&Go “electric diagrams” software.

Very adapted to manufacturers who equip their technicians with mobile devices, Script&Go offers a very significant gain of time on the composition of the diagrams. 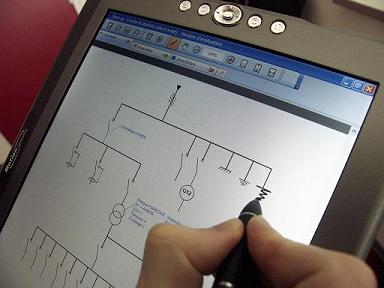 Script&Go enables a user to compose electric diagrams by drawing their components on the sensitive screen of the tablet PC ; the software interprets the hand-drawn strokes progressively. The user thus gets an immediate feedback.

Script&Go allows composing a very large panel of electric components, such as inputs/outputs, connexions, switches, circuit breakers, disconnecting switches, earths, generators, transformers, fuses, etc. Composition and editing are designed to be as intuitive and as fast as possible. The user can select elements by surrounding them and then move them or delete them with the pen.