We designed a system for on-line musical score editing. Thanks to the use of an electronic pen, the user can write musical symbols on the touch screen, the same way he does on paper. His strokes are interpreted progressively by the system and changed by their corresponding recognized symbols. 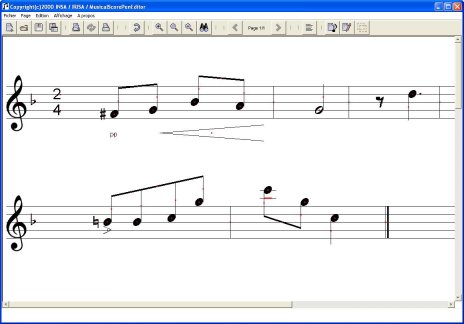 The system allows the user to edit on the staffs bass or treble clefs, whole, half and quarter notes. Thanks to additional lines, these notes can be realized above or below the staff. Notes can have a durational dot. All the accidentals are available for the notes and for the clefs. Nuances are also present in this version of the application. Line bars can be realized on the staff. Half, eight, sixteenth, thirty second and sixty fourth rests can already be edited. These symbols can be selected and moved from one part of a staff to another, or deleted. The system is able to deal with documents with as many pages as needed. The user can add a page anywhere in his document and move from one page to another easily and just using the pen.

The system proposes some of the usual editing possibilities, like undoing the last stroke, zooming in or out. It is also possible to save the document in a file, and to load a saved document. In the current version, the saved file can only be used in the application, and it is yet impossible to export a file so that it can be used in another, more traditional, musical score editor.

Our aim is to design a system as close as possible to the user needs. To do so, we collaborate with the MIAC (Music and Image: Analysis and Creation) laboratory of the University of Rennes 2: our functionalities and ergonomic choices are validated by professional musicians (cf. Collaborations).